Volleyball All-Area player of year: Eagles' Thomas spiked the pain along with opponents 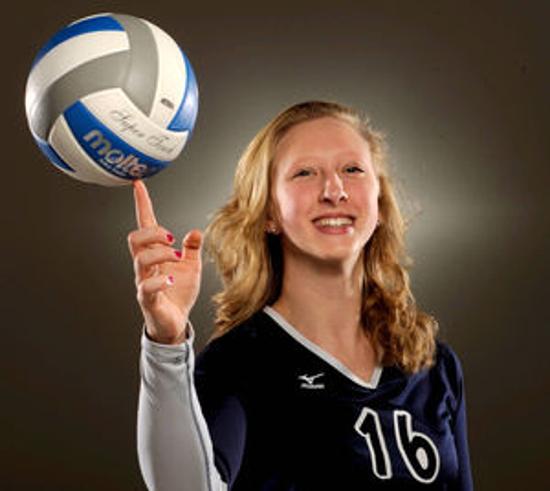 For several months, the simple act of getting out of bed was a chore for Colonial Forge junior Nori Thomas.

The pain would have been unusual enough for an average teenage girl, but Thomas is an elite athlete, tall and muscular with the ability to swat a volleyball with ferocity.

“I remember I used to wake up and my knees would be so bad that I would walk like an old woman to get my morning started,” Thomas said.

Thomas, 16, went through a lengthy period of uncertainty and pain before being diagnosed last September with juvenile idiopathic arthritis, an inflammatory joint disease that every year affects about one in 1,000 children aged 16 and under.

Thomas has controlled the condition through physical therapy and medication. Since starting her current treatment, her volleyball career has taken off.

With a new lease on her career, the 6-foot-1 Thomas was nothing short of dominant during the 2014 high school season.

The middle hitter led the Eagles with 332 kills, 81 blocks, 102 serving aces and a .445 attack percentage. She was a first-team All-Conference 4 selection after helping lead Colonial Forge to a 23–8 record and the conference championship.

For her outstanding season, The Free Lance–Star has named Thomas its volleyball player of the year.

“I think she set a lofty goal this year to prove a point,” said Jeff Thomas, Nori’s father. “She wasn’t going to let things going on in her body stop her.”

Thomas made up for lost time after being stuck in neutral for more than a year. She returned to the court late last season and was a pivotal player for the Eagles in the playoffs. It wasn’t until this season, however, that she realized the potential that many saw in her as a young club player.

She had two defining moments in the summer: selection to one of the prestigious teams of USA Volleyball’s High Performance Program and earning a full scholarship to Division I Elon University.

“I really pushed through the summer,” Thomas said. “I was like, ‘Cmon, Nori, you want this scholarship, just keep going, keep pushing, I know you can do it.’ It paid off.”

Thomas’ strong play carried over to the high school season. She used a fierce competitiveness and motivation from her past trials to perform at an All-State level.

“I don’t think juvenile arthritis defined her, but it gives her incentive and it really drives her to excel,” Jeff Thomas said.

Thomas is competitive, but very approachable. That’s how she’s able to play at such a high level while also maintaining a magnetic personality that allows her to hit it off with teammates and competitors alike.

A good example of this dichotomy occurred in the Conference 4 championship match at Forest Park High School. Bruins senior libero Kenzie Higareda, a Georgetown signee who set the VHSL record for career digs this year, edged out Thomas for conference player of the year honors earlier in the week, and that was a big motivator for Thomas.

“I congratulated Kinzie before the match, but under my breath I was like, ‘I’m going to take you down tonight,’” Thomas said.

Thomas proceeded to have one of her best performances of the season with 17 kills and eight stuff blocks in a five-set victory.

“Yeah, you don’t want to doubt her,” Colonial Forge coach Keith Mesa said. “Us beating Forest Park in the conference finals was a tall task. They are loaded. They have at least four kids that are full-scholarship Division I players. I think people have faith that we will do well because she is out there.”

Thomas’ leadership qualities are rare even for a powerful program like Colonial Forge, which is 164–3 against area teams the last 12 years.

Thomas is fun-loving, but she’s not afraid to be honest and sometimes blunt with her teammates. That combination makes her a prototypical leader, Mesa said.

“Nori is probably the best leader I think we’ve ever had here at Colonial Forge,” said Mesa, who has had seven of his girls selected as All-Area players of the year during his 12-year coaching tenure.

“And honestly, we’ve had some pretty good players here. We’ve had a lot of full-scholarship players, but I don’t think we’ve had one that has controlled the team as well as Nori is able to control the team without damaging any relationships, which is always a very tough task for girls.”

Thomas’ unique perspective is fueled by her competitiveness and past experiences with her physical condition.

She wears a bracelet that says, “Kids get arthritis too.” It helps her remember what she’s experienced, and it reminds her of what so many more young people are going through with the painful affliction.

“To be honest, I feel happy,” Thomas said. “I stand up in the morning, look in the mirror and I flex my legs and say, ‘Yeah those are pretty straight today.’

“I have a lot to be thankful for. Nothing has really brought me down too bad.”

BY GABBY BUERHLE / THE FREE LANCE-STAR

Something had to give.

“It’s bigger for us that we snapped our conference championship drought over snapping their winning streak,” Colonial Forge coach Keith Mesa said.

“We saw the banner hanging on the wall that Forest Park took from us last year and we kept saying, ‘We’re not going to lose anything. If we win, they’re the ones who are losing something,’” said junior middle hitter Nori Thomas.

Thomas came up huge for the Eagles with 17 kills and five blocks. But perhaps more importantly, Thomas seemed to provide a spark for the rest of her teammates whenever she was on the court.

“I’ve been here for 12 years and Nori is the best leader I’ve ever seen,” Mesa said. “She’s full of energy and she wants to get better. And sometimes she wants it too much, so she’s one you have to pull it back. But we’d rather have to have her pull it back than to try and push it out.”

The Eagles’ start was less than ideal for Mesa, who attributed the poor start to being “too jacked up.”

“That was part of the problem,” Mesa said. “It’s not about being jacked up, it’s about being relaxed, in the moment, and focused on what you have to do.”

After Forest Park (23–2) rolled to an easy game one victory, Mesa was able to regroup his squad and he finally saw his defense click.

“That’s the best defensive game we’ve played all season,” he said. “We just kept balls alive. That was all grit, will, and character.”

The Eagles had three players with double-digit digs (Nicole Ibinson and Madi Porter with 17 and Isis Garcia with 10).

Forest Park junior outside hitter Peyton Dunow was doing her best to force the Eagles off their defensive game, but they kept finding ways to keep the volley alive.

Maghan finished the game with a game-high 42 assists.

“[Forest Park’s] Kenzie [Higareda] was the conference player of the year last year and I want that for myself,” Thomas said. “I wanted to prove something.”

Higareda was out to prove something, too.

With the 14 digs she recorded during Thursday’s game, Higareda is now only 21 digs away from setting a Virginia state record. She came into Thursday’s game with 1,886 digs.

Perhaps the turning point of the game came during game four.

Forest Park was leading two games to one, and with the game tied at two points apiece, an error in rotation not only gave Colonial Forge a point, but also cost Forest Park a point.

Colonial Forge started game five on a 5–0 run and cruised to a 15–10 victory, and the Eagles were finally able to hoist the Conference 4 trophy for the first time in four years.

“We try to pull together as a team,” Thomas said. “We’re a very close-knit team and when we’re on the road, we’re just trying to keep everyone together and keep spirits high.”

“Being on the road is different, but we were on the road tonight and this is the best I’ve seen us play,” Mesa said. “It’s a mentality. Sometimes it’s better for the kids because they’re away from the distractions, which allows them to focus on the game. And we certainly did that tonight.”

Coach of the Year

Hope Kelley and Brooke Sanders recently graduated from Colonial Forge High School and the volleyball program but had the opportunity to compete one more time together at the Virginia High School Coaches Association (VHSCA) All Star game. Like so many times here at Colonial Forge the group emerged victorious in their last high School match together. Brooke had 7 assists and 3 aces in the match and Hope Kelley was named the East All Stars MVP with 7 kills, 10 digs and 3 aces. Congratulations ladies on a fantastic end to a wonderful career!

Check out the story from the Lynchburg News and Advance right here! http://www.newsadvance.com/sports/high_school/west-all-stars-stymied-by-east-s-big-three/article_1aced80a-08a0-11e4-bb38-001a4bcf6878.html